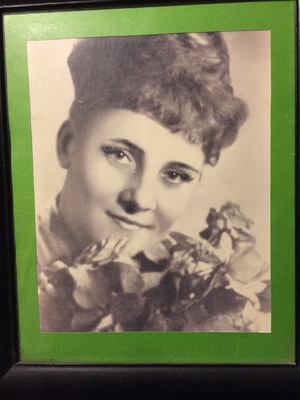 My Beautiful MotherMy Mom at 35 years old, a year before she had me.

Every child thinks their dad is the strongest and the smartest, and their mom is the most beautiful woman on this planet. But for me, she was also a fairy. There is nothing this woman couldn't do that didn't come out amazingly beautiful: she could knit, sew, crochet and my family depended on her skills to dress us in her creations for all weathers and occasions. She could create home decorations out of IV tubes, ornamental pieces for Christmas tree or just anything for anywhere in the house. She cooked every day, and every dish was a hit (except for this one soup, which I don't even want to discuss, and I love soups in general). She knew a billion songs in Russian and Ukrainian. She was so warm and welcoming, people couldn't help but to be drawn to her. She always wore high heels, even at home, her slippers had a 2 inch heel. And when she smiled, she had the best smile in the world, and she was so easy to joke and laugh with. I remember as a teenager happily foregoing any of my friend's parties just to hang out with her. She was beautiful.

When I moved to the United States I was 19 and fearless. She was 54 and decided to stay back in Ukraine. Next time I was able to see her I was 24 and was a young mother myself. Before I left Ukraine for the second time, her and I got into a spat and I held a grudge for a long time. March 8th, International Women's Day, which is celebrated around the world, came and went, and I didn't receive a card from her, like I usually did. I chucked it up to her forgetting, and since I still held the grudge, decided not to call. Late May I received a letter from a friend, which was 4 pages long, written in same pen. At the end, there was a paragraph, written in a different pen, offering me condolences on my mother's passing.

Everything stopped that moment. My world came to a standstill while my head wouldn't stop spinning. I was devastated, felt guilty, ashamed and experienced such enormous loss I didn't think I would live through it. THE WOMAN who gave me life has died....Later I found out she died in March, but no one had bothered to tell me. It's been 20 years and I still can't talk about that day. 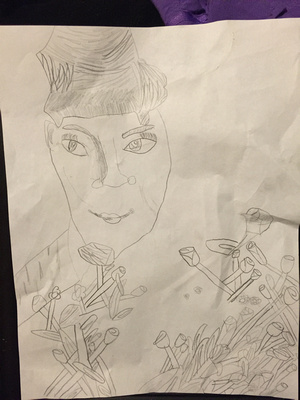 Mom's Portrait by LinaMy youngest daughter's portrait of her grandmother, she's never met, from one of a few portraits I had left of her.

When I came to this country, I brought a duffel bag full of my family photos. A year after living here, my house burned down, and I lost them all. I lost my history, I lost myself. To my children I didn't exist before being 20 years of age (when my American friends begun taking pictures of me).

10 years after the fire, I received a phone call from a man, who said he was passing by my house while the firefighters were working on putting out the fire on my house, and throwing everything out of the house through the windows in snow. He saw my family photos laying around: some burnt up, some ok, some wet. Without hesitation he started collecting them, brought them home, and put them inside those thick phone books in his garage in an attempt to prevent them from curling while drying.... and forgot all about them for the next 10 years, until he was emptying his garage to sell the house.

He found my contact information, and returned my past to me. The joy me and my daughters had while looking through the images, and reconnecting with my past, their roots, and our family was indescribable.

Sadly I only have a handful of images of my mom, but oh how I wished I brought more.

This Mother's Day give your mom a gift of portrait. If you are a mom, give your children a portrait of yourself. When you are gone, what do you leave them with? Memories fade, but your portrait will bring them comfort for many years ahead.

Till May 12, 2018 I offer a special on Mother's Day Portraits. Click HERE to take advantage of it, and to offer your mom a day of makeover, champagne and fun, while creating family heirlooms. Capture the memories for your children, next generations, and people who love you.