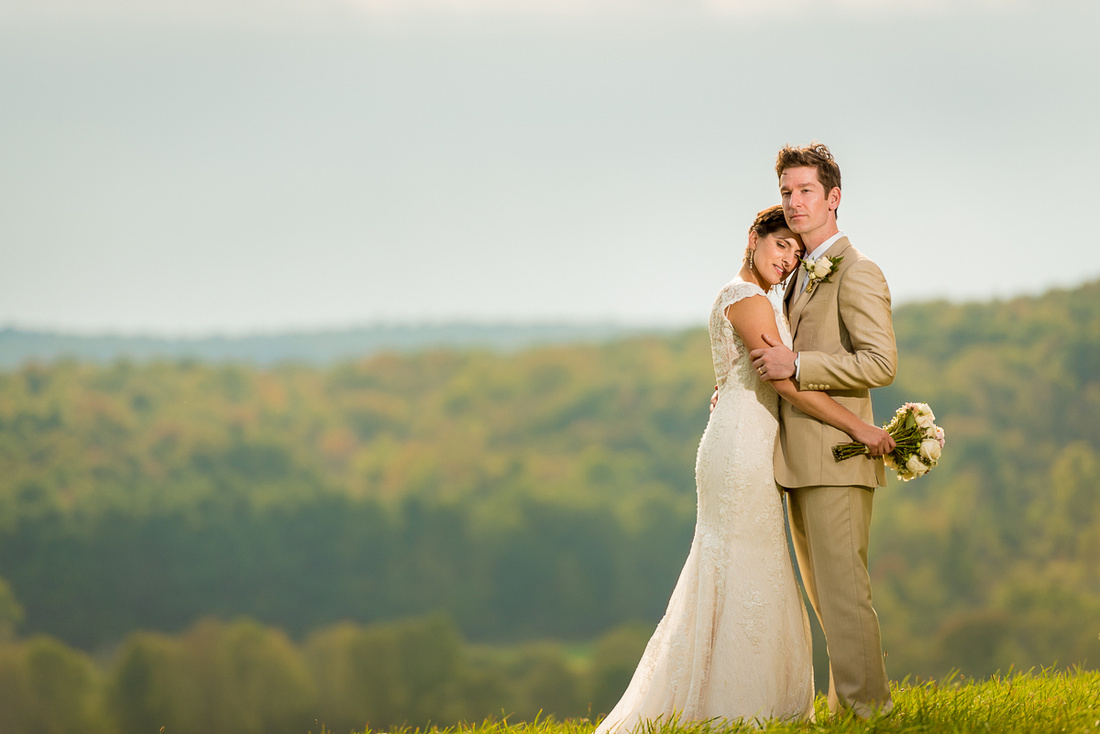 It was very special for me to photograph Holland and John's wedding on September 19, 2015 at a beautiful Gilbertsville Farmhouse in Upstate NY.

I've met Holland and John several years ago, and it is with Holland's gentle persuasion that I, as a starting out photographer, I agreed to shoot a wedding of John's & Holland's officiant back in 2013.

When John & Holland described their wedding day to me, it sounded unusual, but very well planned out. The ceremony took place in the woods, on top of the hill, where all in attendance sat in a circle. John's and Holland's close friends read "The Love Story" written by John's brother Mark, who flew in from Norway. Mark narrated the story offering a unique peek of the couple's romantic beginnings captured in early e-mails to each other. Holland's mother wrote a beautiful song that she and John's mother performed together during the ceremony to honor the union of their children, and a unique ring blessing ceremony took place, where each guest held the rings for a brief moment while saying a silent prayer for the young couple. John and Holland asked everyone to put away their filming/picture taking devices and just to be present for the moment. The ceremony felt warm, and personal, and I will never forget looking around a not seeing a dry eye in the circle, including my own. That's what being present means...you feel the feelings, and offer a piece of your soul instead of worrying about taking shots. Big thank you to all of John's and Holland's families and friends for respecting their wishes, and allowing me to capture the sharing of your souls.

The reception took place in a wonderfully decorated and very spacious barn, and was filled with toasts, cheers, dancing and merriment. Holland is an unbelievable, top notch, best of them all (and I don't give out praises easily) baker, so you can only imagine what heaven on earth her cake and dessert table turned out to be. A four tier cake which she made on her own, where each layer had it's own unique flavor, was nothing short of a marvel. Knowing my weakness for her baking, she generously sent me home with a container full of her desserts. And for that I will be her slave forever. :) At the end of the evening, John and Holland entertained their guests with a fantastic Argentine Tango, performed by them. Those who are not familiar with this couple should know, Argentine Tango is something they are absolutely fantastic at.

Even now, two weeks later, I am very much under the influence of that day and I want to thank you, John and Holland, for putting so much effort into your wedding day, weathering all the obstacles along the way, and impressing your wedding photographer with your one of a kind wedding. Stay kind, graceful, loyal and humble as I know you today, and may universe continue raining its blessings on you. :)

Anne (bride's mother)(non-registered)
"The Book of Love" was sung during the ceremony by the bride's uncle, Scott Stockman. You are hearing the original version as it was recorded during the ring warming when each guest held the rings and offered a silent blessing for the couple. In the middle of the song, the groom extended his hand to dance with his bride while the rings were passed. The recording device was hidden in the pot of white mums visible on the tree stump. Scott is playing the guitar. The keyboardist is Mark Brockley.
Ellen(non-registered)
Who is singing The Book of Love?
Wendy(non-registered)
Absolutely gorgeous!
No comments posted.
Loading...
Subscribe
RSS
Recent Posts
What do portraits have to do with divorce? Mother's Day Gift Not Photogenic? Here is how to fix it! The Olde Tater Barn Wedding of Anthony & Rebecca The Barn at Lord Howe Valley in Ticonderoga Wedding of John and Claire Birch Hill Wedding of Rachel and Andre Holiday Gift Offer Arangetram Imperfectly Perfect! What is a Boutique Studio?
Keywords
photography couple love romance Lana Ortiz wedding Portraits engagement glamour boudoir
Archive
January February March April May June July August September October November December
© Lana Ortiz Photography
User Agreement
Cancel
Continue