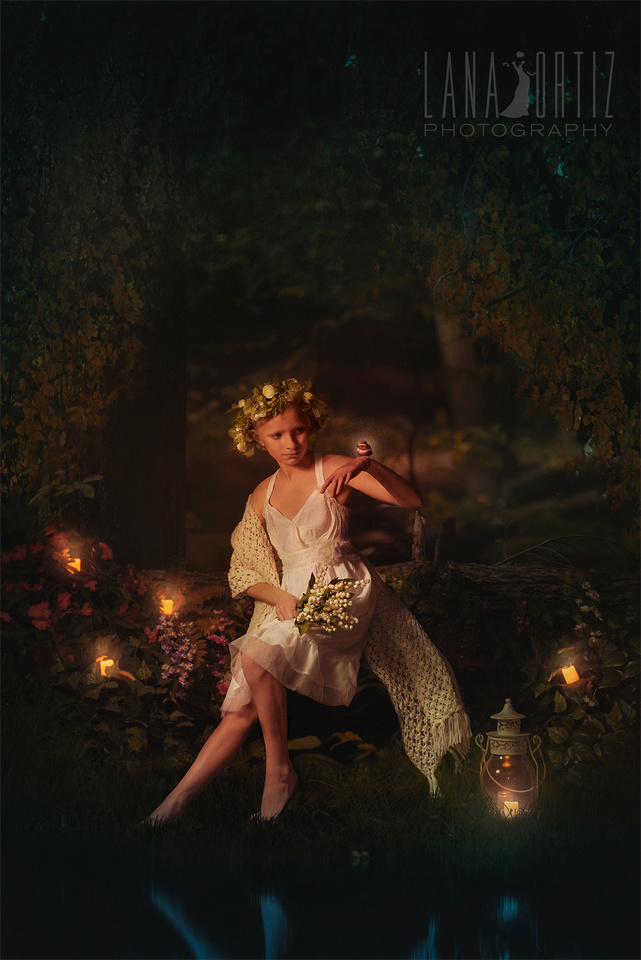 Mia has alopecia. She is 11 years old and she had no hair, and very little of eyebrows left.

I've met her and her dad 2 years ago, when one of my daughters and Mia were on the same basketball team. Before general practices took place, Mia's dad, assistant coach, took time to explain to parents what alopecia was and to ask them to prep their children to it as well. I have to admit -  although I've read the message, I didn't feel I had to prep Jules, my daughter, for this experience. Not to my surprise at all, Jules, who has the hair that inspires envy in every hair salon we go to, was very understanding, compassionate and kind toward Mia. About the same time, I did Julia's photoshoot as a fairy and a mystical creature, when Mia's dad responded with words of praise. I felt compelled to offer a similar shoot to Mia, as my gift to her. It took them 2 year to accept it and walk through my studio's doors.

Mia came in having no hair on her head and missing her eye brows. She came in dressed in a casual attire, as I suggested, and her eyelashes, which were still present, made her look like she had a heavy eye make up on, which I knew was not the case. For the previous 2-3 days all I could think of is the images I wanted to create for her. I wanted them to be planned in such detail that the photoshoot took nearly no time. I told Mia my ideas, one of which was her being a fairy, situated in a forest. She was all for it. I explained the posing, and then I noticed - one strand of hair that meant a lot to her before and  which she proudly kept growing long, was missing. I planned on this strand to be braided and displayed throughout the shoot, but when I asked her "where is the strand?", she casually explained that she felt it stopped growing so she chose to cut it off as well. Can I explain how proud I was of this little girl who placed no self worth against the weight of her looks. She was beautiful regardless, truly beautiful. But seeing this disregard to the presence of hair, which American society is so conditioned on valuing, I was happy to see, Mia's values of herself lay in other pursuits.

The light this girl emits from within is bright and kind. She went along with all of my instructions, and was the best model possible. Throughout the shoot all I cared for is how to make her feel beautiful, while not hiding the fact she has no hair. To my delight, this 6 grader was able to see her beauty regardless of her condition. She simply either liked the images, or said nothing (a polite "no" as I took it ).  Not for a second her condition came up as a disability, as a matter of fact it allowed for us to explore fashion in a different sense, where head wraps were a fantastic substitute for the hair.

I walked away thinking I have to write this blog, if only for one thing: teach your daughters their self worth as something beyond and well past the physical appearance. Especially if you are a father. Your influence, as little girl's first most important man in their life, is so wrapped up in what you find beautiful or not about them. Do not dismiss them because they are not as good as others at some things, do not compare them to others, do not try to restrict them to the views of our society of what is beautiful. Mia's dad ooh-ed and ahh-ed at every image of her I shared with him, and every look I've created was gushed over. Mia completely deserved it, and I think every little girls must know, even if the rest of the world doesn't agree, the people who matter the most to her, find her lovable, beautiful and full of potential. This kind of ensurance produces strong women who are the backbones of families and societies that raises our future citizens.

Nancy(non-registered)
this girl is beautiful and so are you Lana ! You are a very special person to do this for this preciuos girl . I know first hand what the magic with your camera and the love that you put into did for me .
No comments posted.
Loading...
Subscribe
RSS
Recent Posts
What do portraits have to do with divorce? Mother's Day Gift Not Photogenic? Here is how to fix it! The Olde Tater Barn Wedding of Anthony & Rebecca The Barn at Lord Howe Valley in Ticonderoga Wedding of John and Claire Birch Hill Wedding of Rachel and Andre Holiday Gift Offer Arangetram Imperfectly Perfect! What is a Boutique Studio?
Keywords
photography couple love romance Lana Ortiz wedding Portraits engagement glamour boudoir
Archive
January February March April May June July August September October November December
© Lana Ortiz Photography
User Agreement
Cancel
Continue