I was all pumped up to create another image that would win me this contest however when I was done, I've realized that it might've been a little over the top. I've submitted my entries but did not expect to win. Let me back up.

Every year St. Agnes cemetery puts up a contest for photographers and their best images from this cemetery. Last year my image took second place and I couldn't be happier. This year, the cemetery decided to expand this contest to several other cemeteries in the area and to allow 2 submissions per photographer. On the day of the big announcement, or as I called it, a Judgement Day, all entries were displayed at concourse level of Empire State Plaza, where anyone could browse through those images and admire them.

Last year, a day before the Judgement Day I received a phone call from the director of St. Agnes Cemeteries making sure I will be stopping by for the big announcement. To me it was a hint that my image won some prize and so it did. This year however I received none of such calls. I understood that I didn't win anything, and went on a planned tour of Martin Van Buren historical site in Kinderhook, NY with my kids and my friends. While at a dinner in a quaint Destinos, my phone rang.

I won. First place and $500 check. What a great ending to a beautiful day it was. I've submitted two images: "The Goddess of Memory" and "The Trumpet Player". The goddess won. It is a composite of 17 different images, involved a photoshoot with a wonderful model and a talented hair and makeup artist (4 hrs), about 3 hours scouting the location for the backdrop, and 24 hours of editing the image. Thank you everyone who kept encouraging me through the years! 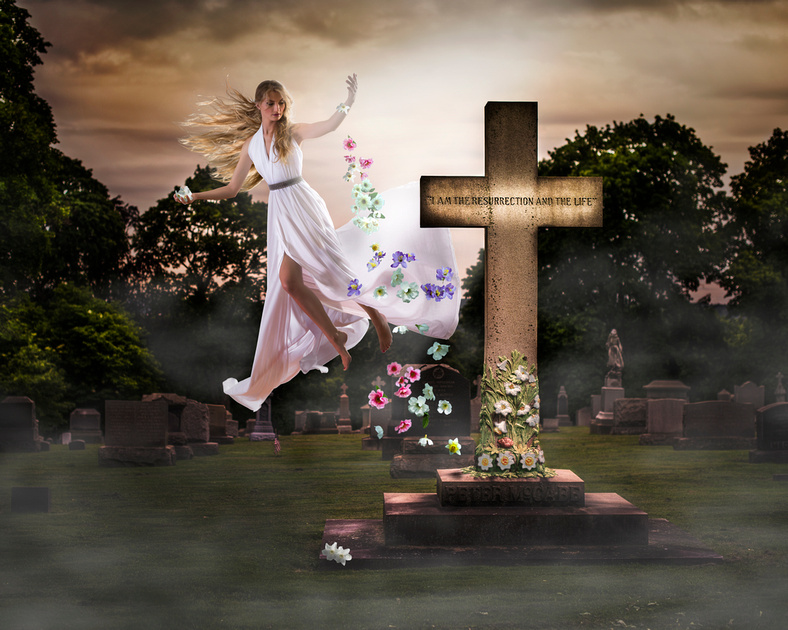 The Goddess of Memory - Lana OrtizThis image won a first prize on October 19, 2013 at a photo contest organized by Albany Diocesan Cemeteries.